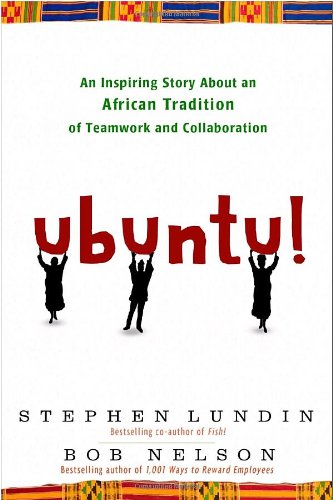 This is one of those books that teaches lessons by telling a story of characters who learn them. In this story, a manager is placed at the head of a department that is not performing well and he finds himself overloaded with work that he decides he must do himself. One day, one of his employees, a man who grew up in a small village in Africa, stays to help him. Through their conversation, the employee tells the manager of a philosophy called Ubuntu that was born in Africa.

It deals with helping others through a shared connection that invariably helps everyone. Put differently, we are individually and collectively what make up ‘humanity’ and it is therefore in our best interest to invest in the wellness of others. It is credited by Nelson Mandela and Desmond Tutu as their foundation for reconciling blacks and whites in South Africa with no retribution.

The manager, with numerous other employees, flies to South Africa to learn more about Ubuntu and how this employee came to live his life by it. Upon learning more, he brings the philosophy back to his company. His implementations took numerous forms. Through two types recognition of others being part of the same human family, he could improve his role as a manager. One type is recognizing others for who they are, and the other is for what they achieve. He also implements a bigger emphasis on support and collaboration to foster individuals in taking on new endeavors.

Why should anyone read it?

The message is aimed at helping businesses improve through the power of collaborating. By shedding yourself of me-ism, you can find the humanity of others. To say it is simply collaborating is oversimplifying the book’s lessons, however. Aside from outright adopting Ubuntu’s philosophy company-wide wherever you work, the concepts deliver a framework for viewing other people and, subsequently, the world.

If you have difficulty with anyone at work, the philosophy in this book will help you to see life from a different perspective (specifically, that person). A troubled relationship, in any area of your life, is destined to compartmentalize people. The book shows that the best way to understand the philosophy is to experience it. It forces your to participate – instead of sit in the stands and watch – in the life you lead at work. Coworkers come in all shapes and sizes, so to think you’ll naturally get along with all of them is absurd. But if you adopt a mindset of looking at each person as being on the same road as you, travelling in the same direction, for the same goal (of lifting the entire group’s well-being), then you can change differences as obstacles to differences as opportunities.

It may not save every relationship, and it won’t bring total clarity to your business, but even if you’re the only person who adopts a better mindset, you improve the entire team by a positive percentage. That is enough for anyone to dive in with both feet and learn more about themselves and those around them as one unit.

“To engage another person in an authentic was releases the most powerful energy on the planet.”

“You do not have to respect sloppy work, a bad attitude, or missed deadlines, but you do have to always be respectful of the person wh odoes the bad work even as you work to improve it.”

“As I was working with my own issues I would often envision what it would look like to put the principles of Ubuntu into action in real situations.

“What things do you want most present in the life you spend at work?”

Buy it on Amazon

This is an affiliate link. It means if you use this link to make a purchase, I make money. That money helps run this website. And occasionally buy ice cream.

This site uses Akismet to reduce spam. Learn how your comment data is processed.

Philip is a former business consultant who currently writes about where leadership meets psychology. On occasion he mixes in education and social impact, aiming to improve the world one person at a time. Earning his degree in Psychology and an MBA from the College of William & Mary, he offers insight into looking past a standard checklist life by digging into what makes you tick and then improving it. He also enjoys crappy pizza and writing about himself in third person.

Scroll back to top