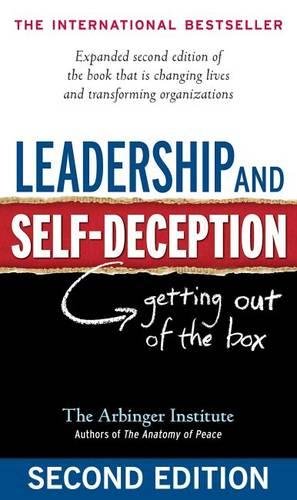 In every aspect of your life, you will have to deal with one thing eventually: other people. This book discusses the relationships that we share with other people and how small (and incredibly subtle) thoughts can lead us right into a box. This idea of a being in “the box” describes when we are simply unable to see others as they are, but rather in the negative way that we want to see them.

The story is told through a narrative of a man starting a new job at a company that trains all new employees with this idea. We can get in the box by simply not acting on a thought that concerns someone else. This eventually leads us to convince ourselves (“self-deception”) that the other person is somehow doing wrong by us. Now we are in “the box” and getting out seems almost impossible because we don’t even recognize we are in a box. Through numerous examples, many of which you will probably find apply to your own life, the story helps guide a new employee to get out of the box in the many relationships he has. In terms of leadership, it advances the thought process that can lead to our own failed relationships; and if leadership requires at least one thing, it is relationships with others.

Why should anyone read it?

The key to this book is in the road map that helps us trace our own thoughts back to where we started deceiving ourselves. This doesn’t imply that you’ll be able to mend every relationship because there is always another person in the relationship. They could refuse to come out of the box and even put themselves more in it when help is offered. What this book does is give us a more honest look at ourselves and the part of the relationship that we can control. In many scenarios, the problem will be brought to light by taking this deconstructed and focused viewpoint, like a X-ray flashlight.

If you’ve ever been in an argument, you’ve probably encountered situations where you apologized first and the other person replied with their own apology, leading to a healthy conversation. In perhaps an oversimplification, this book provides the advanced level of that situation. A good exercise would be to think about a person you really cannot stand to be around or talk to; now try to think about what it would take to mend that relationship. Does it have anything to do with you? If it didn’t, this book will probably help you see otherwise.

“If I betray myself, my thoughts and feelings will begin to tell me that I’m justified in whatever I’m doing or failing to do.”

“I saw in myself a leader who was so sure of the brilliance of his own ideas that he couldn’t allow brilliance in anyone else’s.”

“Since there are many people in my life, in an important sense, I can be both in and out of the box at the same time. In the box toward some people and out toward others.”

“We won’t know who we work and live with until we leave the box and join them.”

Buy it on Amazon

This is an affiliate link. It means if you buy it using this link, I make money. That money helps run this website. And occasionally buy ice cream.

This site uses Akismet to reduce spam. Learn how your comment data is processed.

Philip is a former business consultant who currently writes about where leadership meets psychology. On occasion he mixes in education and social impact, aiming to improve the world one person at a time. Earning his degree in Psychology and an MBA from the College of William & Mary, he offers insight into looking past a standard checklist life by digging into what makes you tick and then improving it. He also enjoys crappy pizza and writing about himself in third person.

Scroll back to top